Installing PowerCLI on a disconnected network

It is a constant battle working on multiple secured disconnected networks when everything is going to the cloud. What's worse its now XAAS (Everything-as-a-Service) is the new norm and I guess this means Powershell modules as well...specifically the most important one for our environment, PowerCLI.

We upgrade out vCenter environment to 6.5.2 and I figured I wanted the same PowerCLI version

I guess starting with 6.5.1 it's now a module you can get only from Microsoft PowerShell Gallery. But I want to use 6.5.2...

HINT: You can still use the 6.5.0 installer if you like, but I like using the latest greatest and starting with

There is an article that states how to do this, but I found this does not work entirely.
https://blogs.vmware.com/PowerCLI/2017/08/new-release-powercli-652.html


I have downloaded the PowerCLI using the command

Copied it an external drive, moved it over and copied it into my profile path (C:\Users\Username\Documents\WindowsPowerShell\Modules\). Opened a new instance of powershell and its not loaded nor is it recognized as a module.

$env:PSModulePath does state my path is one of the locations. Hmmm...

I first try to import the module manually, but I kept getting the error when loading its first dependency, VMWare.VimAutomation.Sdk:

After troubleshooting this over and over and reading online forums about it and getting nowhere, for shits and giggles, I tried running this command on my disconnected system, thinking it would find the modules on my profile or at lease an error I could follow:

Instead I get an message saying I need to get that latest nuget. What?

I was curious, I decided to click Yes knowingly it will not work, but thought it would give me an error code I could work with: 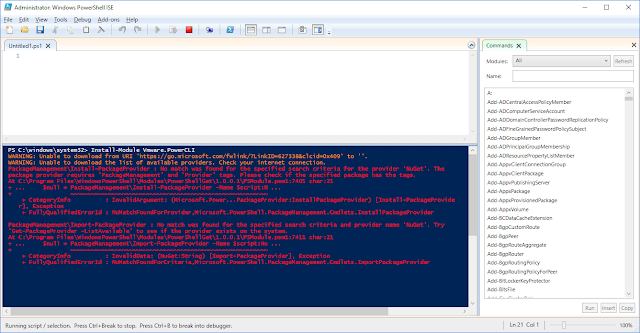 No file information but it did give me a link....

I go to my internet connected PC type in that link. It takes me down the rabbit hole of the azure cloud

I get redirected to: https://az818661.vo.msecnd.net/providers/providers.masterList.feed.swidtag

Which then I find the link for Nuget: https://oneget.org/nuget-2.8.5.208.package.swidtag

That link takes me to the actual dll: https://oneget.org/Microsoft.PackageManagement.NuGetProvider-2.8.5.208.dll

Based on this I search where this dll's get installed at on my connected system:
C:\Program Files\PackageManagement\ProviderAssemblies\nuget\2.8.5.208\Microsoft.PackageManagement.NuGetProvider.dll

Cool. I copied the dll over to my disconnect system (using the same folder structure). Then I re-ran just to see if I get prompted again:

No nuget message but now all I get is it can't find the repository. Great....not 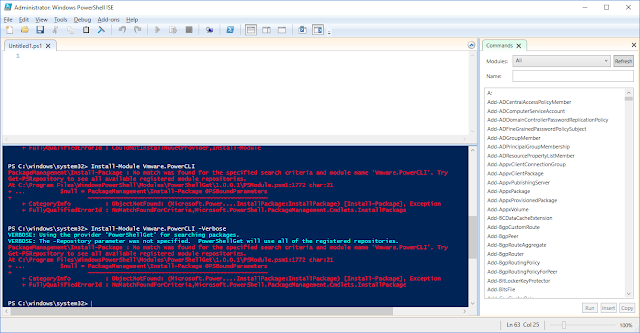 Obviously I'm not connected to the internet so the repository its looking for is not available. What now?

It came back with dependencies that weren't install.

I import the module VMWare.VimAutomation.Sdk, success!

The PowerCLI does have 18 other modules that are required to be loaded first. But which one first? If you try to import the each dependencies one by one (alphabetically it will not work), they too have dependency errors. If you open the VMware.PowerCLI.psd1 file in notepad (or ISE) you will see the dependencies with their version numbers:

I thought that by running this it would auto install the modules for me...Nope

Instead I wrote my own installer ps1 file. I wrote it to parse the required module in VMware.PowerCLI.psd1, then add it to a hashtable with its version, then find those folders and look in their psd1 file for sub dependency, then install in the appropriate order.

These are the features added to the script:

The difference between old installer, it used to copy the modules to the C:\Program Files (x86)\VMware\Infrastructure\PowerCLI\Modules, add Initialize-PowerCLIEnvironment.ps1 to theC:\Program Files (x86)\VMware\Infrastructure\PowerCLI\Scripts folder, a a startmenu and desktop shortcuts to that scripts for 32-bit and 64-bit Powershell and add an entry into the PSModulePath system environment variable.

You will also need to have a copy of nuget with the saved version of PowerCLI. The folder structure should look like this:

If there is a later version that comes out, the script does detect that folder or you can update the variable (line 4)


You can get the PowerShell script on github (updated 2/8/2019): PowerCLIInstaller 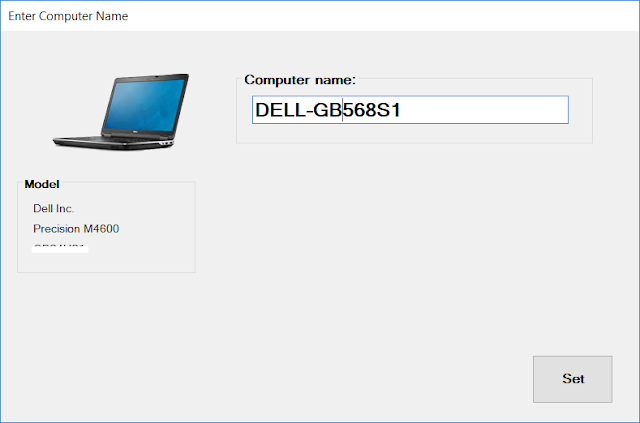 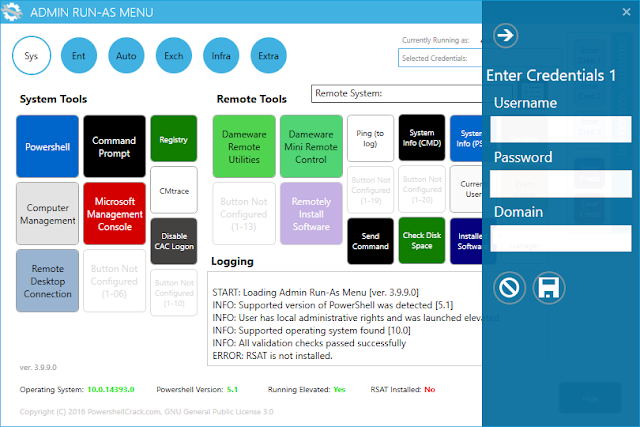